In May of 2014 I was in San Francisco for the Cisco Live conference. Everything seemed to be going well at our company’s booth, so I ducked out for a day and attended the Solid Conference 2014.

I have to say that it was an amazing experience. I wasn’t expecting much, but within a few minutes of walking in the front door, I was blown away. The speakers (every one of the keynotes!) were simply terrific, and the display area had exhibitor after exhibitor showing things I’d read about in the last year, or seen on Kickstarter. Like the Boston Dynamics Big Dog robot, or the Google Glass booth, or the Form 1 printer, The Lit Motors motorcycle/car, the Taktia handheld CNC machine – and even suppliers like Seeed Studio or Electric Imp who’s stuff I’ve bought. 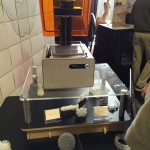 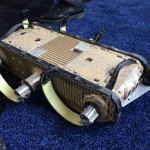 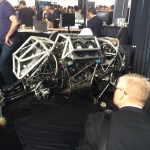 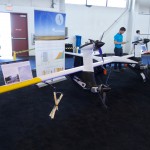 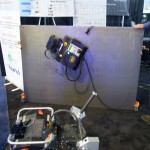 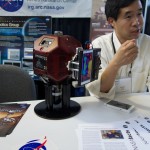 Small bot that flew on ISS 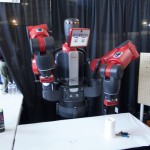 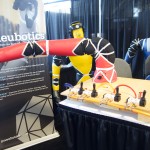 This robot arm smacked me in the nose!

Here’s the URL for the solid conference sessions.
http://solidcon.com/solid2014/public/schedule/proceedings

Some sessions worth checking out:

This lady was terrific. She’s at MIT, and looking into some neat things you can do with modular CNC machines – where you can re-use the CNC machine elements to create different types of machines. Her personal web site is pretty interesting as well.

Very neat to see what Google is up to and why they do the Google X stuff. They had a glider on display that they plan to use to generate power. It’ll fly itself up, then reverse it’s propellers in order to start generating power. The idea is to get up into the air high enough for there to be steady winds. Neat that the generator planes can fly themselves, and can land, to be easily repaired.

This guy’s English is not great, but he was brilliant. They could have cancelled the rest of the day just so we could listen to him talk.

Robotics and the natural language of creatives Tobias Kinnebrew

These guys use industrial robots to help create Hollywood films. For example, the special effects in Gravity used these guys.

Beyond Gadgets: Interactive Everything Ivan Poupyrev